Home » Life » 7 Reasons Why You Need an Affirmation Journal
Life 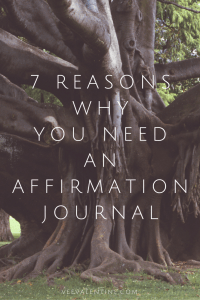 While shopping at Charming Charlie, a bright yellow journal caught my eye. It read “Happy Thoughts” in obnoxious hot pink letters, and I couldn’t help but purchase it. I’m not a journal type girl. I’ve tried dozens of times to start one, but I’ve never been able to keep up the habit. However the brightness of the journal design inspired me. I wanted my life to mimic that brightness. I decided, as I handed over my coins to the cashier, to use this notebook as an affirmation journal ( a goal of mine that I had been putting off for awhile now). 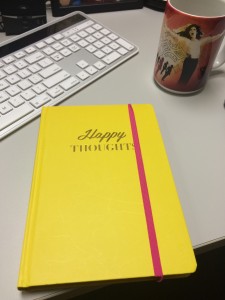 I made a goal of writing 3 things I was thankful for each day, as well as a quote that resonated with me. I also tried to refrain from writing the same things over and over again. This was my attempt at retraining myself to think in a more positive way, and thus affirming and attracting more positivity into my life. 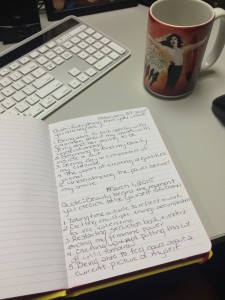 After maintaining this routine for about a month, here’s a few reasons why I believe everyone needs their own form of an affirmation journal.
1. It forces you to think about the positives in your life on a daily basis
I chose to list at least 3 things that I was thankful for each day. In the beginning it was hard to think of the good that occurred within my life because I was so used to thinking negatively. Over time it became easier. Eventually I found myself excited to write in my journal later that night when great things happened- no matter how big or small. A task that took at times 30 minutes or more, became a 5 minute exercise. There were even times that I had to limit myself in how many things I wrote down for that day, in fear that I’d run out of space!
2. You create a routine of daily introspection
Spending time every day devoted to your own thoughts, beliefs, and feelings helps to heighten your own self awareness. Making a daily commitment to continue your practice of writing in your affirmation journal, is a daily commitment to taking time out for yourself. This in turn may help your understand yourself better, as well as help you figure out how to better deal with the obstacles that life may throw at you.
3. You find quotes that resonate with you, that you can later use as mantras
Trying to find daily quotes that stick out to you naturally makes you wonder why you they resonate with you in the first place. Not only do you think about the meaning behind the quote, but you also may notice patterns in the types of quotes you select, or the subject matter. Some quotes may stand out more than others, and can be remembered to use later when you need help or inspiration to get you through different experiences.
4. Whenever you need a pick-me-up, you can go back and read the blessings that have been bestowed upon you
There were times when I was going through a rough patch that I would go back and read some of the great things that have happened in my life. It reminded me that I had so many things to be thankful for, and that my next blessing was right around the corner. I realized that the negative experience I was having was only a drop in the bucket, and would eventually be over. This helped me to better deal with the negative energy. I found myself falling into depression less and less. Negative experiences no longer had the power to push me into a downward spiral.
5. You have a physical representation of your growth
Just as you can go back and read through your journal to help find joy in the moment, you can also read through your journal to see your growth throughout the journaling process. After a short amount of time I noticed that it not only became easier to think of things to be thankful for, but it also became easier to find the blessing in things I’ve never noticed before. I realized that things didn’t need to be grand in order for you to appreciate them. Sometimes you should take a moment to bask in the little things: like having a few moments to read a chapter from a book you’ve been putting off finishing, or going to brunch with a girlfriend you haven’t seen in awhile.
6. You have an accepting space where you can express yourself without fear of judgement
Your journal is a place that you can express your thoughts and feelings without the risk of receiving backlash. It is an open space to say whatever it is you’re feeling. And guess what? It’s always available, day or night.
7. It’s Free! (Relatively)
I don’t know about you, but I can’t afford to go to a therapist daily. Sometimes you need a listening ear, so that you hash out your thoughts. And an ear can be a expensive, just ask my bank account after a few therapy sessions. Journaling does need a fancy degree in order to be productive. Hell, you really don’t even need to purchase an actual journal.  You can use the notes section on your phone, a free app such as Evernote, scrap paper, a notebook you have lying around, etc. All it takes is commitment and a little writing space, and you’re on your way.
Here’s an entry from my personal journal. Remember, you don’t have to follow my example. Just figure out what resonates with you. The purpose of the journal is to create a space where you can practice positive thinking to help manifest additional positivity into your life. 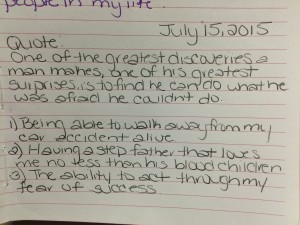 11 Comments on 7 Reasons Why You Need an Affirmation Journal