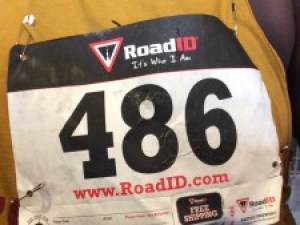 Ladies and gentlemen, I did it! I completed the first (hopefully of many) task from my 26th birthday bucket list created to force me out of my comfort zone, and jumpstart this year of living in discomfort. [Check out my bucket list here]

Since I created that list and posted it on le blog on my birthday, it has been sitting in the back of my mind. The more time that had passed, the more worried I got about getting even the first task completed. I didn’t want this to be something else that I allowed fear to keep my from accomplishing. However, my friend invited me to a 10K trail run (thank you Kristen!) at the end of June which allowed me to not only focus on a health-related goal, but also cross off one item from my bucket list.

I chose adding the completion of a race onto my bucket list because it would force me to concentrate on something health related other than my weight. It also forced me to stop using my weight as an excuse to not experience the outdoor adventures that my inner tomboy craves. I was also hoping that the completion of the race would teach me something about my struggles with being comfortable within myself and getting out of my comfort zone.

The DOWN2EARTH Trail Run was held at the Gilligan’s Island trail in Oleta River State Park on June 28th. We knew we had signed up for a 10K, but we didn’t know how difficult that 10K would be. Oleta River State Park is pure woods. Had we read reviews on the trails prior to driving to the race, we also would have realized that the trails were man made full of obstructions, roots, and rocks. Mannnn, we had no idea what we had agreed to.

Mile 1 was great. I finished around the same time that I normal do when I run on gravel or road. However, once that mile was over, the trail seemed to get more rugged as we started to go uphill. It became harder to catch my breath and I continued to trip on the roots and rocks that lay on the course.

It took every ounce of strength and will I had to get through this race. There was plenty times that I wanted to give up, but I refused to allow myself to throw in the towel. I kept tripping during the race, which caused my ankles and knees to feel like they were about to give up (with or without my approval). Not only was I fighting against the fatigue and trail obstacles, I was fighting against the pain in my back and neck that crept up around mile 4.

If you guys remember, I was in a nasty car crash 3 days prior that totaled my car (read about how that changed my life here). I refused for that to be a reason why I missed out on this opportunity, or let the money that I paid for the race go to waste (I’m cheap yall). For 3 days after the car crash I rested, medicated, and prayed, hoping that I’d be ok for the race. Welp, I’m pretty sure you guys know what resulted from that epic failure of a judgement call.

Side note: It’s been about 2 weeks since the race, and I’m currently writing this post in front of Urgent Care. I’m headed in to get pain meds and muscle relaxant for the muscles in my neck and back that refuse to chill. I’m pretty sure that it’s due to not sitting my butt down and allowing my body to heal properly before tackling a 10K. Lesson learned. Hopefully.

Anyway, I finished the race- back aching, neck cramped, ankles and knees on their last leg, blisters all over my feet, and a bruised pride- but I finished. Physical activity, especially running has never been difficult for me (even with the extra weight). So the fact that this is was one of the most difficult things I’ve ever had to accomplish caused a lot of introspection as I fought to finish the last few miles.

In life, there will be times that obstacles are thrown in your path to shake things up a little bit. You may get in your groove, relax, and feel as though you’ve got it all under control. But those are the times that you need to be most ready for anything that may happen. Life is about growth, and these obstacles are a way to gain a new perspective.

Running had become second nature. I was able to push myself to do long distances with no problem. But it was always on road or gravel. This race added a new obstacle to my running routine, and forced me to realize that I had gotten comfortable, and no longer challenged myself. Now I’m focused on adding more variety to my training so that I can not only attempt other nature trail races, but come back and beat the trail that started it all- once I heal of course.

I hope my rambling makes sense to someone out there. See you next time.