Home » Life » The Car Crash That Changed Everything
Life 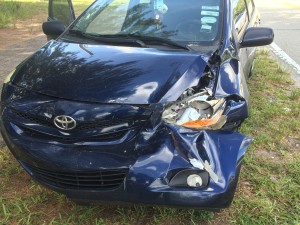 And so this happened… one month before I finished paying off my car, I got into a car crash while heading to work. A car stopped in the middle of a busy road, and a Cadillac tried to turn out of the car’s way, while also trying to stop (forgetting that with such a big vehicle, it would be hard to maneuver out of the way in time). As soon as I realized what was going on, I tried to stop my car, but it was too late. My driver side connected with the Cadillac’s right back bumper.

In shock, I allowed my road rage to take over, and I jumped out of the car to confront the driver in front of me. It wasn’t until later after I had calmed down did I realize how much danger I put myself in by doing this. The guy was over 6 feet tall, solid, and bald. I don’t know about you all, but for me, being bald is like a cheat code to having additional strength. The guy rolled down his window, shocked that I was attempting to go off on him. I must say in retrospect (and with his own admission), I could have gotten seriously hurt.

As I stood cursing out the Cadillac driver, the driver that caused the accident ahead of us sped off once she realized that we hadn’t hurt her car.

I had started my day off on the right foot, early for a change, and ended up with a totaled car (with $800 left on the auto loan),a ticket for being unable to stop my car from hitting the Cadillac, back and neck injuries, and a negative attitude.

I forgot to be thankful for surviving the incident, or mindful of the lessons the Universe was trying to teach me. I didn’t care. I focused on my ruined plans and the hurt I felt from the incident happening to me. No matter what anyone said to me, I couldn’t shake the negativity.

A week has gone by, and I realize now that this was just one of the curveballs that life throws at you, and it’s up to you to decide whether to rise above it or fold. I’m making a conscious effort to grow and learn from this situation- but I won’t deny that it is hard.

I’ve actually found reasons to be thankful: my life being spared, the settlement, being given the opportunity to purchase a car that I have been lusting after, getting a real life lesson on the importance of having a “rainy day savings”, and the motivation to take life by the reins (hence me finally moving forward with this blog, and even writing this post). I am blessed, no matter what.

I have to take it a day at a time, and remember that things will get better as long as I believe. As I write this I also have to be thankful for my friend Kristen, because during these past week or so, I have been Negative Nancy and extremely hard to deal with. Thank you, friend (I know you’re lurking).

Hopefully you all don’t have to have a near death experience to learn the lessons that I had to, and you can use this as another example of what not to do. I seem to be giving you guys a lot of those. [Read my blog on how to fail at meeting your goals here] But as long as I grow, and help someone else as well, then it’s all worth it.