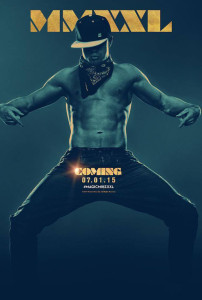 The only way you haven’t heard about the release of Magic Mike XXL is if you’ve been living under a rock. Since you’re reading this post, I consider you one of my internet friends. Therefore, it is my duty to pull you from underneath that rock so that we can both prosper in all the glory that is Channing Tatum’s glistening body.

But before I began, let us take a moment of silence- at least 1 second for each ab muscle we can see on the movie release poster (I counted 6).

Magic Mike XXL allows us once again to enjoy the many talents of Mike Lane, a retired stripper who misses the exciting, wild lifestyle that exotic dancing provided. Mike gets a chance to relive the ::ahem:: magic when his old stripping crew invites him along on their roundtrip to a stripping convention in South Carolina. With a name like “The Kings of Tampa” this road trip is not for the faint of heart- and guess what girls? We get to watch as it all unfolds in theaters beginning July 1, 2015.

I was lucky enough to attend an early screening of Magic Mike XXL Tuesday night with a few coworkers (yeahhh… weird, I know). Frank Theatres, located in Delray Beach, provided a few lucky moviegoers with a Magic Mike experience. A ‘MAGICAL Night of MAGIC MIKE XXL’ not only included an early viewing of the movie, but also a LaBare pre-show, raffles, giveaways, and $5 Cosmopolitans. I think you’re starting to see why I couldn’t pass up this opportunity. 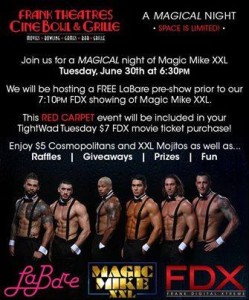 That amount of women that stood in line, Cosmos in hand, was enough to make many of the men in the lobby nervous. One guy walked by, eyes huge, and said, “You guys all can’t be Terminator fans! What are you women up to?” 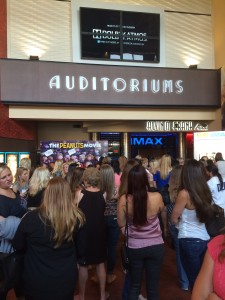 I must say that Frank Theatres Cine Bowl & Grill outdid themselves with this event. Although I wished it were a little more organized, we all thoroughly enjoyed ourselves. Some people even won gift bags filled with Mage Mike paraphernalia, movie tickets, and LaBare gifts. Unfortunately your girl wasn’t one of those people.

Before I go, you know I’m not going to leave this post without giving you a peek at what you missed. I wouldn’t be a friend if I didn’t. Don’t mind the darkness. It’s hard to scream, throw ones, and take video all at the same time. 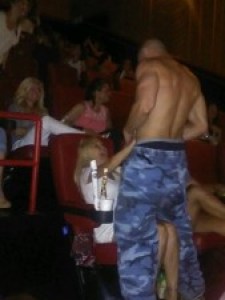 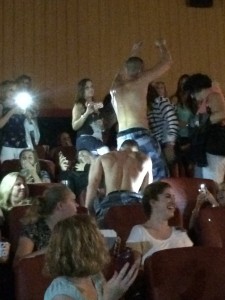 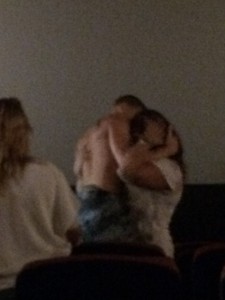