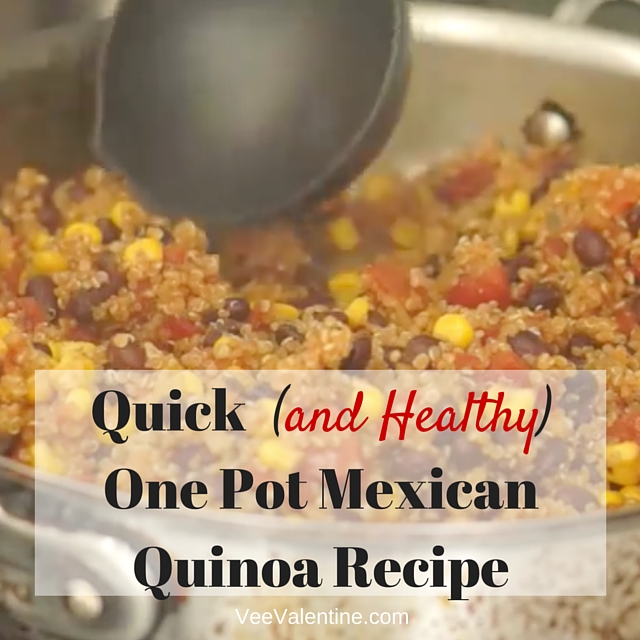 I’ve been trying to clean up my diet by not eating out so much and limiting the amount of processed foods that I eat. I decided to start meal prepping breakfast, lunch, and snacks Monday through on Sunday evening. I’m working both jobs pretty much every day this week so I needed something that would provide me with enough fuel to keep me going in between jobs, and still be semi healthy.

This week I tried a modification of a recipe I saw on Facebook called “One Pan Mexican Quinoa”. The video looked appealing enough, so I decided to give it a go.

Let me start off by saying that I originally planned on following the recipe completely, but things happen. I added too many diced tomatoes and there wasn’t enough quinoa to balance out the dish, so I had to add rice. I also didn’t use vegetable broth, and instead used plain water and a taco seasoning pack. [Listen yall, don’t judge me. At least I’m honest.] I get experimenting from my grandmother who says that “as long as it’s made with love, everything will turn out just fine”- and I happen to agree with her.

Here are the list of ingredients that the original recipe calls for:
Onions
1/2 of a jalapeno
1 cup of corn
1 can of black beans
1 can of fire roasted diced tomatoes
3/4 cups of quinoa
1 tsp chilipowder
1/2 tsp of cumin
1 cup of vegetable broth

From what I gathered from the video you add onions and jalapeno to a lightly oiled pot, allowing the onions to caramelize. You then add the corn, black beans, tomatoes, quinoa, and spiced. Taking a spoon, stir the mixture before adding the vegetable broth. Allow the dish to cook for 20 minutes until quinoa is done.

Check out the video below.

What I love about dishes like this is that they’re basic, and allow for you to add your own signature to make it your own… which is exactly what I did.

This dish turned out amazing! I’m a little nervous about my family eating it up though, so I put a sticky note on my food asking that no one touch it. It gets serious in the Walker household when it comes to food in the refrigerator.

I’ve been happily eating on this dish every day during lunch at work. I’m looking forward to the next dish I decide to meal prep for the week. If you’d like to see what I come up with, you can check out the recipes by clicking here.

What are some of your favorite dishes to make when meal prepping? Let me know in the comments below.

4 Comments on Quick (and Healthy) One Pot Mexican Quinoa Recipe